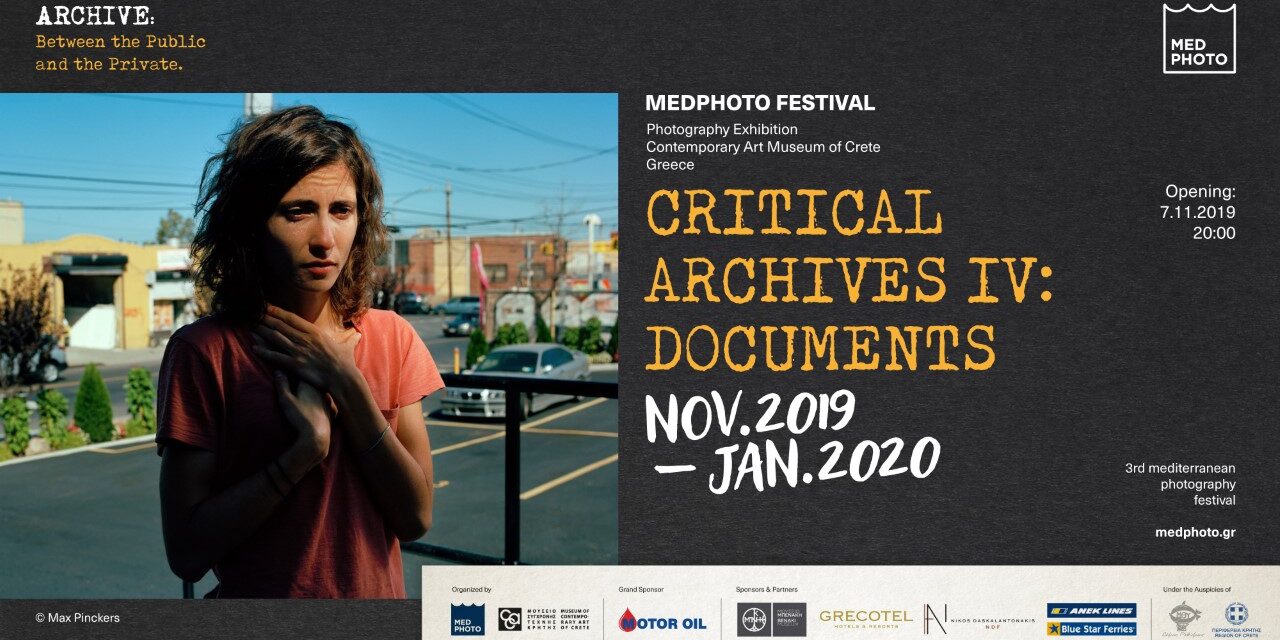 In the exhibition CRITICAL ARCHIVES IV: Documents, visual documents dealing with social relationships and their transformation in time, their construction and spatialization, are placed within new contexts which explore their hermeneutical limits between the private and the public. Photography is seen here as an archiving instrument by default, as an a priori medium of recontextualization, and a practice which has always found itself in the flux of classification, preservation and circulation of fragments forming pieces of official versus alternative historiographies.

New levels of meaning are added to works deriving from research, like Forensic Architecture’s, whereas others, like Johan Grimonprez’s, immerse us into the ideological function of technical media while revealing their documentarian features and pointing to specific historical events.

Big-scale political events that have brought about turbulence or even the collapse of whole structures, enter into dialogue with personal stories seeking to create new connections. Such “collating” we feel is taking place in Georgia Ponirakou’s Makronissos, where one of Europe’s direst periods is linked with her family’s past. Similar links are drawn by Alvaro Deprit, who takes a close look at the lives of immigrants as they shatter into pieces and reassemble anew against the backdrop of an auto scrap recycling yard. Imbriaco and Bonaventura present us with a documentary body of work focusing on those marks inflicted by the Mafia on the Italian society; onto buildings, neighborhoods, and dark judiciary chambers.

Another intersection happens between Andrea & Magda’s sarcastic view of a western-looking advertising poster for a construction company in Ramallah and the glossy image by Costas Mitropoulos depicting an impeccable naked woman from a men’s magazine; those are two instances of normalizing processes that classify gender identities; processes of standardizing desires and dreams; processes which mediate between us and what constitutes the familiar. At the same time, a different scope of those parameters that regulate intimacy is offered by Laura Pannack with her nudist or nature-lover communes. As for Maria Karkanaki, she comments on what could be obstacles inhibiting true intimacy, such as wearing “masks” or assuming social roles.

A visual psychographic exploration is attempted by Yvette Kapsala (and beauty standards are also under scrutiny), next to a family album by Lorenzo Castore, which reminds us of a palimpsest, raising questions about how such a documenting practice per se can lead to a passage from the hidden to the open; from the private to the public. This is also touched upon in a different way in the works of Galatea Iatraki and Marilena Stafylidou, who save, manipulate and present wasted or lost photographic archives of unknown people; it feels like they are “talking” to those people, while at the same time studying the matter out of which memory makes itself. The technical and mediatic limits of such a materiality is to be tested by Haris Grigorakis and his fluctuating portraiture. And issues of a wider sociological and psychological interest rise in the series of Ioannis Stefanidis or in Tonia Koinaki’s book.

And yet, images such as Panos Kokkinias’ tableau vivant put into question the boundaries between the natural and the artificial, or the constructed versus the original; meanwhile, this image looks like a repository for a collection of people standing in alignment.

In this exhibition, the domicile is also dealt with as a place for the protection, preservation, and reproduction of relationships, memories and symbols. At times we witness it through a clinical and distanced view, such as that of Joachim Brohm or Dimitris Sidirokastritis, or through Alec Soth’s “curiosity” into the lives of others; other times its monumental aspect comes at the foreground as a luxurious abode or a house of gods as in Pathenon Rising II by Bill Balaskas. Elsewhere, the public office becomes “home” to all kinds of state archives, standing guard to power relations or the status quo: a topo-nomological bureaucratic structure such as the one depicted in Dimitris Harissiadis’ photograph.

In an era of an overwhelming post-truth dominance and of escalating political antagonisms visual signifiers are utterly suspended – and fiercely claimed for at the same time – by rivaling forces. In such turbulent times, this exhibition projects a necessity for re-positioning the technical image as an instrument for the fabrication and control of collective memory. To this end, the work of Max Pinckers stands out as it creates enigmatic connections between the fictional and the documentary uses of the technical image. He explores the ways in which a (visual) archive acquires validity and also questions the source of the power entitling subjects or agents to propose or impose codes that link images of things to -supposedly- their origins. Under the same light we can see Alexis Vasilikos’ gesture to appropriate images from NASA. Richard Mosse on the other hand, uses idioms that point to the notion of the panopticon and extend our thinking toward unraveling omnipotent networks of biopolitical power. Such works offer another lens for examining archives as places for the creation and conservation of various discursive orders.

The exhibition CRITICAL ARCHIVES IV: Documents constitutes a kind of contemporary, non-linear and ephemeral cabinet de curiosités, which, through interdisciplinary practices, collects scattered signifiers of a visual grammar and creates heterogenic relations. This temporary “museum” is a reflection anew on the notion of authority; on how all those different signs of meaning are attributed a monumental character. This collective narrative faces the technical image, among others, as a means of exorcizing death, as a document of an absence or the presence of a void – something quite evident in Dimitris Michalakis’ picture. Overall, what is attempted is a deeper understanding (or even contestation) of the past and present, in service of a promise for the future.

As we become witnesses and partakers in the fragmentation of modernist categories which define our perception and manipulation of reality, we try to trace the cracks lying within current dominant imaginaries. Deeply in these cracks, we work as archivists, rearranging the pieces, seeking for new myths and new inscriptions. Thus, we aspire to reposition and reinvent ourselves as creators and political subjects alike.