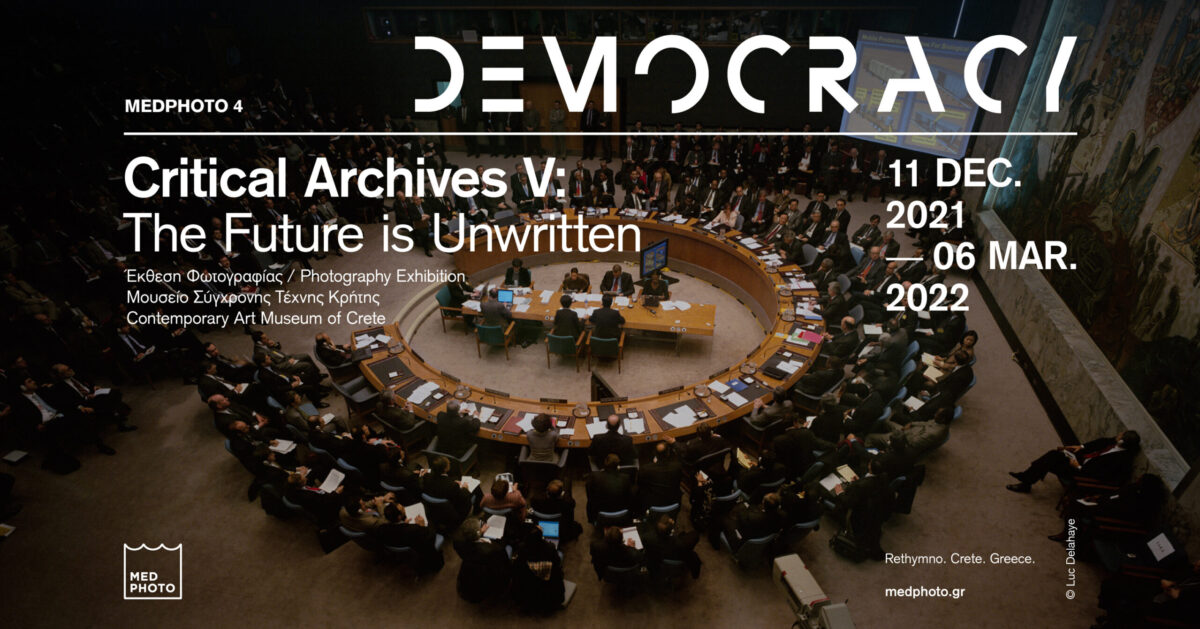 The exhibition’s title Critical Archives V: The Future Is Unwritten appropriates a popular phrase by Joe Strummer, member of the punk band The Clash. The question it raises is what kind of temporalities open up each time we view the concept of democracy as a tool for critiquing social reality. The multiple interpretations and uses of democracy and their imprints on the social body – as wounds or potentialities – are traced through photographic series, videos, texts and books that oscillate between fiction and documentation, between the mythical and the rational foundation of democracy.

“Maybe there is a substitute for experience”, we read in the illuminated motto of the Wall Street Journal’s advertising poster, photographed by Martha Rosler. What could this substitute be and who does it represent? Why is it proposed as an alternative reality, what exactly does is substitute for and to whom is it addressed?

The artworks in the exhibition seem to be entangled in an asymmetric warfare game. Barbed wires, control systems and invisible networks; communication headquarters and decision-making centers behind closed doors; impersonal institutions; complex surveillance systems and shady mechanisms for the construction and dispersion of information; walls and territories, where democracy is enclosed and subjected to the executive plans of technocrats, while in its periphery displaced people are crowded on drained land. Potential actors who strive to live and define themselves. And a pervasive climate of threat and emergency that dominates the public discourse, having a numbing effect on action and reflection.

“Coming soon very sad”, says someone with a graffiti in Stéphane Charpentier’s image, warning us of a bleak future that is already present. The images of the exhibition and the narratives that accompany them embody this ominous atmosphere of an imminent fall. At the same time, they explore the possibilities of a critical representation of a dire globalized condition – through articulations of various counter-discourses over identity, gender, race, class, decoloniality. From within all those metal grids of war, broadcasting screens of fictitious prosperity and Big Data exploitation games, people’s unique and vulnerable bodies emerge, lying in between spaces, and choosing to reveal themselves in all their precarity and their nostalgia for a forgotten future. In their transition between oblivion and history; between action and melancholy. Eventually, they become alive and transcendent as bodies, longing for their Eden – mundane and beyond naked life. Their first stop in this journey is the fantasy of a place that is time present.

This is where another feature of today’s democracies lies, that of the ever-replaceable present. This recognition of time as consumption makes it necessary to reassess the relationship of modern democracies with the culture of accelerationism and uncompromised technological progress, at the same time as the far-right rhetoric is being normalized.  As a counterpoint, the exhibition, and perhaps the photographic medium as a whole in its materiality within a museum, gives space to images that seek slower rhythms – and attitudes sometimes heretical – in our perception and interaction within the social field.

The historicity that characterizes processes such as the above is a dimension that often “escapes” us, not accidentally so. Are we witnessing a radical paradigm shift on a planetary scale? Are the structural paradoxes that accompany democracy since its emergence becoming increasingly apparent? How could a new social grammar of democracy be written? How many and who would be its authors?

The first three editions of MedPhoto (a festival taking place at the southernmost tip of Europe) were developed with a focus on the borders and exclusions imposed by Europe, the multiple attempts to institute specific identities within it, as well as on the mechanisms that make up the respective imaginaries at the individual and collective level. The 4th edition comes to contribute to this long-term research process, focusing on the big word on which the foundations of the West was built: Democracy. Type of regime, governance process, ephemeral Event, great idea, form of state, way of organizing pleasures, trademark, condensed expression of the economy, social lifestyle, or field for the formation of political subjects: The floating signifier of “democracy” eventually becomes the trophy of a perpetuous confrontation about the appropriation of words and their meaning. Running through its ancient Athenian roots, the emancipatory traditions with which it was associated in the 19th and 20th centuries, its use in the establishment of colonialism around the world, as well as its modern contradictory aspects, the question that MedPhoto 4 seeks to raise is what kind of possibilities we activate or disempower each time we invoke democracy.